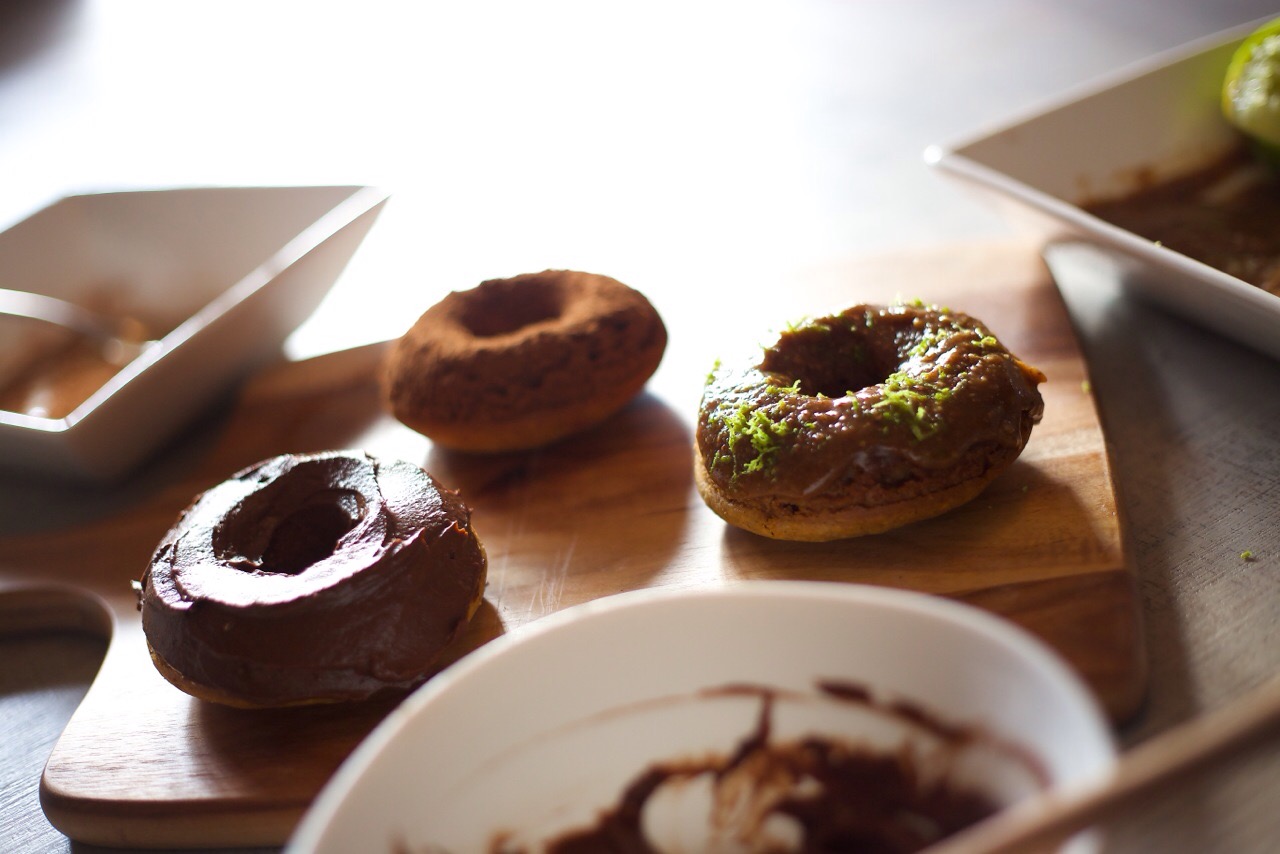 Holy donuts Batman….. Actually un-holey donuts. I got a bit , ok, way too enthusiastic with my mixture and may have overfilled my NODO Donut Pan and basically these bad boys came out of the oven looking more like a cupcake than a donut. Luckily, for your aesthetic pleasure I used a special tool (also known as fingers) to punch some holes back into them and return them to their namesake, because. Resourceful.

Now look, they ain’t no NODO Donut because I haven’t managed to kidnap Kate yet & steal her super-secret recipe but these suckers are pretty damn good. They are surprisingly light & fluffy and I think the ‘chose your own adventure’ topping would be a cracking kids party/ any party idea instead of a lolly bag!

Grain-free baking can at best be a challenge and, at worst, be a rage-blackout-worthy waste of great quality ingredients that end up tasting like chalky cardboard. I really hate wasting food so now if I have a baking disaster & don’t have the bandwidth to deal with it at the time, I pop the offending items in a container in the freezer and find things I can use them for later. Crumbly cookies can be used in icecream, dry cakes can be blitzed up and added to bliss balls. You picking up what I’m putting down? Don’t waste food. It’s not cool. On with the donut recipe.

Preheat your oven to 170C. Ok, add the dry ingredients to one bowl & mix well. Then, make sure your eggs have come to room temperature, this is not a suggestion, just do it. Now add all the wet ingredients to a separate bowl and mix them well. If you add cold eggs to the mix your coconut oil is going to solidify, speaking from experience this is a pain in the ar$e so just do as I say. Once the wet stuff is all mixed & the dry stuff is all mixed you can add them together and mix them well. Now you want to use a piping bag to 1/2 fill the donut pan with mixture. I used a ziplock bag with the corner cut out because I have no clue where my piping bag is. It works perfectly fine. Bake for 12-15 mins, allow to stand in the pan for 10mins before turning out onto a wire rack to cool. Once cool then you can frost them if you like or just drizzle with some honey, sprinkle with cinnamon and eat.